Last year, on our first day of home educating, in first grade, our first child, it was HORRIBLE. It did not go well. I don’t remember exactly why, but I remember thinking, they are going to hate school, learning, and it will all be my fault!

Cue the circus. After our work was done, I found the box I had just purchased off a buy/sell site on Facebook. It had a circus game, table cloths, animal headbands, and special bags for popcorn (that was really cool for us. Low standards.)

We had a great night. They won a DVD that I already had (What’s in the Bible? had a special promo through a buyer’s club. I got the whole series, but they don’t know that yet. We give them one for special occasions.) We played the game a few times, made popcorn, ate it out of special bags, and watched the movie together. The day ended well.

We kinda do all-year round school. We started grade 2 in May, but have taken off the last five or so weeks. I like the flexibility of taking time off when we need to, and taking the whole month of December off. We are really always “schooling,” it just becomes who you are. But now we’re ready to get back in the swing of structured things, and we have some new friends that are here during the day while their mom works. This made for a way better circus!

This year, I put more thought into the games:

Knock the Balls Down with a Ball

Throw the Water Balloon in the Basket (obviously the other kids had to stand behind the basket as a wall. It was smokin’ hot, so they loved this part!

For our morning snack, we popped popcorn in the air popper and put it in those same special bags.

For lunch, we had homemade pizza (that we had made a few weeks before and froze) and a dance party. The prizes from the circus included a cd from our church’s VBS, and it provided a great soundtrack. In the afternoon, we made caramel apples. I’ve never done it before, and would suggest making the caramel while kids are otherwise occupied. It took a few minutes of stirring, and they were reeaaaallllyyy excited. I used this recipe, but I did it in half and used honey instead of corn syrup. It was so ridiculous good. Even thinking of it now, oh man. There is nothing like homemade caramel. 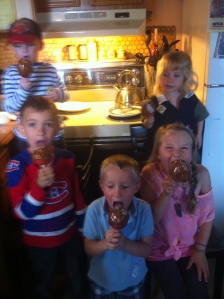 So that was our “first” day of grade two for our eldest, and kindergarten for our second. Next year I would like to involve face paints and a photo booth. I looked up whether you can use acrylic paints as face paints, and I found mixed results. I don’t mind using my kids as guinea pigs, but having other kids over makes me be a little more cautious. So, next year.

What do you do to celebrate the first day, whether you do it at home, or in school?